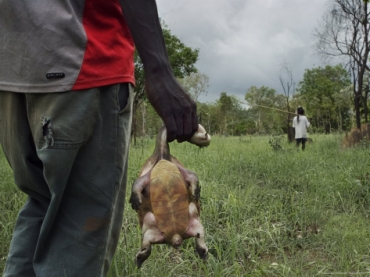 Hunter-gatherer bands usually lack or minimize social distinctions that other societies employ – social clubs, classes, and formal kinship groups, such as clans. Apparently their small number permit individual, face-to-face interactions among members and eliminate the need to subdivide and classify the members of the group.

Such groups tend to minimize their formal politics. Group decisions are commonly made by consensus. To the extent that leadership is recognized at all, it is commonly informal, ephemeral, and limited to spheres in which individuals have demonstrated particular prowess. One man may lead a hunt; someone else will lead the dance. Such leadership is reinforced by the prestige and authority conferred by demonstrated skill and wisdom; it is rarely if ever reinforced by coercive power. Leaders retain their special position only so long as their leadership decisions satisfy their fellows.

In short, bands are typically small, informal networks of friends and kin who know one another personally, who deal with each other as individuals and as friends and relatives, and who remain together largely as a function of mutual dependence and positive feelings toward one another. They tend to operate much in the same manner (albeit with some of the same tensions) that similar small voluntary associations of friends and kin operate within our own society. The difference is that for them such associations comprise the whole community. Economic exchange (a type that anthropologists call reciprocity) usually takes place informally, on the basis of need, social obligations, and personal ties – rather than on the basis of market value and profit – just as it does among groups of friends and kin in our own society. An exchange carries with it the expectation that a friend or kinsman will return the favor in whatever manner he is best able (which may only be affection or respect) rather than returning an object of equal or greater value.

The structure of hunter-gather bands means that patterns of care and responsibility are very different from those to which we are accustomed (or rather they resemble patterns that we associate with friends and family rather than patterns that we associate with society at large). Individual members of such bands exercise a high degree of control over their own group membership and their own economic welfare. Each adult has equal and direct access to resources, direct personal leverage on other significant individuals, and relative freedom to leave the group. Furthermore, the motivations for mutually supportive interactions are commonly strong, as befits groups of friends and kin.

–Mark Nathan Cohen, Health and the Rise of Civilization